Acupuncture is an ancient form of Chinese medicine involving the insertion of solid filiform acupuncture needles into the skin at specific points on the body to achieve a therapeutic effect. No drug is injected. The needles alone create the beneficial effects of acupuncture.  Acupuncture originated in China at least 2500 years ago and spread to neighbouring Asian countries including Japan, Vietnam, and Korea by about 500 CE, and finally to Europe in the 16th century.

What is acupuncture used for?

Acupuncture is used to encourage natural healing, improve mood and energy, reduce or relieve pain and improve function of affected areas of the body. It is safe and effective and is often successfully used as an alternative to medications or even surgery. Relief is often obtained with acupuncture when traditional medical therapy has failed.

How is acupuncture performed? 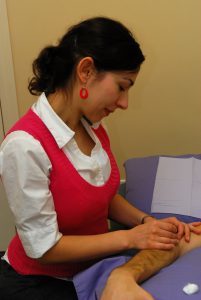 Acupuncture points (also referred to as ‘acupoints’) are places on the skin that have a lower resistance to the passage of electricity than the surrounding skin and are part of a network of points that were mapped centuries ago by the Chinese. Most are found along ‘meridians’ or ‘channels’ that are believed to be the pathways by which energy or Qi (pronounced ‘Chee’) flows through the body. Acupoints are located either by identifying anatomical landmarks or by the classical method (for example: “the point where the middle finger touches the thigh when standing at attention”).

Acupuncture needles are solid, usually stainless steel (they may also be gold or silver), and measure from 13-70 mm, although longer reusable ones up to about 150 mm in length can be purchased. The needles are very fine, flexible and rounded but sharp at the tip. They are ‘atraumatic’, meaning that they do not have a cutting edge like a hypodermic needle, which slices through tissue. Their design allows acupuncture needles to slide smoothly through tissues and makes them unlikely to cause bleeding or damage to underlying structures.

What can I expect during an acupuncture treatment?

A dull, heavy, or aching feeling often occurs when the needle is correctly placed. This is referred to as ‘de Qi’ and is considered by some traditional acupuncturists to be necessary for acupuncture to be effective, however the relief of pain can often be obtained without provoking the de Qi response. Recent fMRI studies indicate that there is a difference in the response of the brain to needling with and without the de Qi sensation.

The needles may be left in place for a moment or ranging from 15-30 minutes, and the practitioner may manipulate the needles to strengthen or reduce the flow of Qi. Lifting, twisting, and rotating are some of the needling techniques a practitioner may use.

With electro-acupuncture needles are electrically stimulated by various frequencies and voltages by attachment to a battery-powered machine using wires with small clips on the ends. Low frequency stimulation (2-4 Hz) results in a slow onset of pain relief that outlasts the treatment for hours to days and is often cumulative by repeating treatments. High frequency stimulation (80-200 Hz) results in a pain-blocking effect that is fast in onset but does not usually outlast the stimulation.

Sometimes the needles are heated by attaching and burning a piece of rolled up Artemisia Vulgaris (mugwort) on the needle handle or by holding a cigar-shaped piece of tightly-packed ‘smokeless’ moxa near the handles of the needles. This technique is known as moxibustion or ‘moxa’. In traditional acupuncture there are indications for the use of moxa when there is a ‘cold syndrome’ or for moving energy.

The ear is a ‘micro system’, meaning that there is a point on the ear that represents every part of the body. The development of a topographical approach to the use of ear points for treating systemically began with Dr. Paul Nogier in Lyon, France in the 1950s. His interest began with the observation of several individuals from Africa who had scars on their external ears in the same location, an area that was used to treat sciatic pain

a technique involving pressure on acupuncture points using the thumbs or fingers, capable of giving relief of symptoms in responsive individuals.

Shiatsu is a Japanese massage technique that employs points that fairly closely correspond to the Chinese acupoints.

According to one study by Ernst et al. (2003) of over 3000 acupuncture treatments, the following are possible effects of acupuncture needle insertion in general:

The physiotherapists, massage therapists and naturopathic doctors at Family Physiotherapy have all been trained in the use of acupuncture to help you achieve your health and fitness goals.

Our Team Book an Appointment